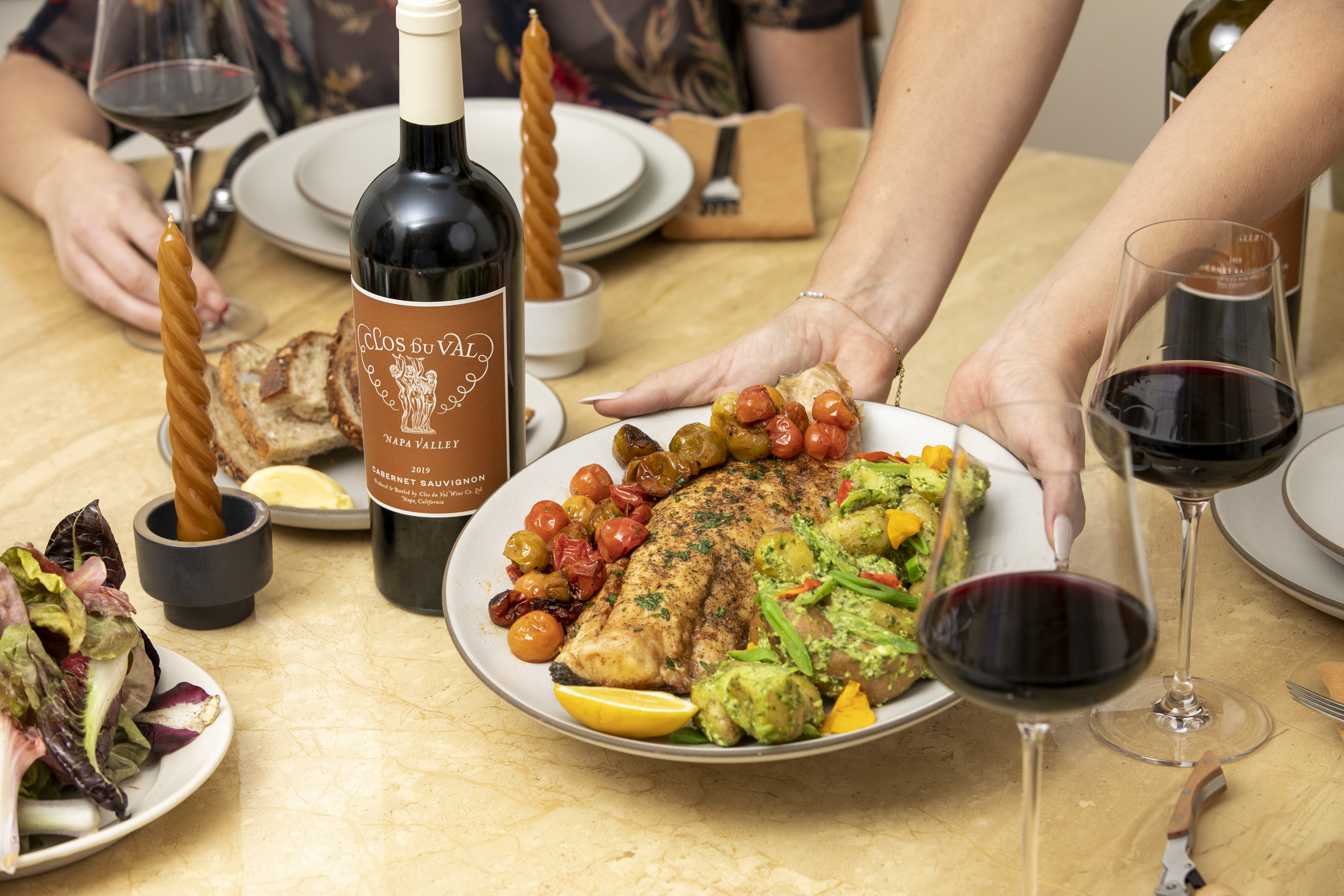 While some Napa Cabs may be best suited for dinners at the steakhouse, we pride ourselves on a distinctly French-Californian winemaking style that results in remarkably food-friendly wines, pairing effortlessly with dishes that other Napa Cabernets might overpower.

Our 2019 Napa Valley Cabernet Sauvignon is no exception – with a fruit-forward palate, refreshing acidity, and elegant balance, it’s easy to see why we call this a four-season Cab.

Chef Helen Goelet’s Red Snapper with Burst Cherry Tomatoes and Pesto Potato Salad recipe was created specifically to pair with this wine, highlighting the versatility of Clos du Val Cabernet Sauvignon (and since it comes together in just under an hour, we wouldn’t be surprised if it earned a regular spot on your spring and summer rotation).

1. Begin by boiling the potatoes in salted water just until fork tender (10-15 minutes). Watch carefully and test with a fork to avoid overcooked, crumbly potatoes.

2. While the potatoes cook, make the pesto: combine garlic, lemon juice, nuts, herbs, feta and chili flakes in a food processor. Slowly drizzle olive oil into the mixture with the food processor on pulse, just until it comes together as a sauce. I like a rough chop on this pesto, but if you prefer a smoother pesto, feel free to keep processing until it reaches the desired consistency. Season with salt and pepper to taste.

3. If your spring peas are raw, give them a quick blanch in boiling water. Once peas and potatoes are slightly cooled, toss together with pesto. I like to serve this salad warm or at room temperature, but if you’d like to make it a few hours ahead of time, keep refrigerated until ready to serve.

4. To cook the fish, pat both sides of the filets dry with a paper towel. Season both sides generously with salt and pepper, then sprinkle lemon zest on the top (flesh) side of the filets. Heat a cast iron pan on the stove until searing hot, then pour in just enough oil to coat the bottom of the pan.

5. Carefully place the filets skin-side down in the pan and sear until a nice crispy texture is achieved (2 minutes or so). Flip the filets, then turn down the heat to medium-low and add the tomatoes to the pan. Cook for another 5 minutes, allowing the tomatoes to gently burst and soften, before adding 2 Tbsp of butter. Cook for another 3-5 minutes, until the fish is just cooked through (this will vary based on the thickness of your filets). Remove the filets from the pan.

6. To serve, spoon the burst tomatoes and butter atop the filets. Sprinkle with freshly chopped parsley and a squeeze of fresh lemon and serve alongside the pesto potato salad.

Chef Helen Goelet is one of Clos du Val’s six family owners and shares her love of food and wine as a private chef based in Jackson Hole, Wyoming.

Our fresh and vibrant 2021 Sauvignon Blanc is a perfect match for all things seafood.…